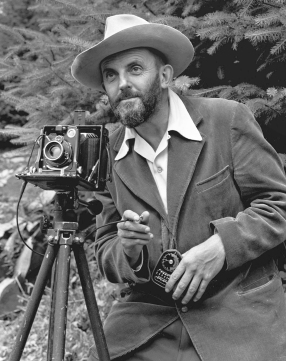 Ansel Adams (1902-1984) stopped using his middle name “Easton” after he was told his uncle mistreated his father in a business deal.

Ansel Easton Adams, one of America’s most famous photographers, is related by marriage to the Easton family, after whom he was named.  Mrs. Ansel M. Easton was the former Louise Adams and her brother Charles was the famous photographer’s father.  The two couples—Ansel and Louise and Charles and Olive—were great friends.  When Olive Adams gave birth to the Adamses’ only son in 1902, they named him Ansel Easton Adams, after the baby’s uncle by marriage.

However, the couples’ friendship was not to endure.  The friendship was mixed with business, and at some point in time the photographer’s father felt he was double-crossed by his brother-in-law Ansel M. Easton.  In his autobiography, the photographer recorded that when he understood the enormity of his uncle’s alleged misdeeds, he stopped using the Easton name.  Adams’s photographs can be dated by his changing use of his name.   Through 1932 the photographer signed his work as “Ansel Easton Adams.”  Then in 1933 he shortened his name to “Ansel E. Adams.”  Beginning in 1934—and continuing to his death—he simply used “Ansel Adams.”1