On Saturday, October 17, 1857, George Henry Howard married Agnes Poett Howard, the widow of his older brother W.D.M., in a 9 a.m. ceremony.  The couple went to Napa Springs for their honeymoon.  W.D.M. had been dead for less than two years.

Whereas W.D.M. and Agnes were separated by 14 years of age, W.D.M.’s brother George was only six years older than Agnes.  He, too, had already lost a spouse, so it was a second marriage for both of them.  Although the marriage was widely viewed at the time as a “marriage of convenience,” it lasted 21 years—until George’s death in 1878—and resulted in Agnes giving birth to four additional children.

During their marriage, George was engaged in a number of business interests—managing the real estate and other business interests that his brother had created, importing and breeding cattle, and serving on the boards of several companies. The Howards also traveled.  In 1862, while Civil War raged in the United States, the Daily Alta newspaper reported Mr. and Mrs. George H. Howard in Paris, where they were being presented to Emperor Napoleon III and his wife, Eugenie. 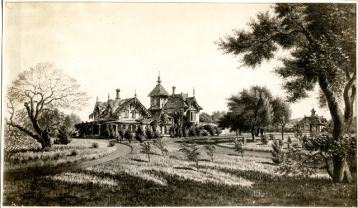 Historians differ as to whether W.D.M. or George was the person who imported to California the pre-fabricated gingerbread wooden home that was erected on Rancho San Mateo.  The most likely scenario is that W.D.M. may have had a small cottage on the San Mateo property and that George and Agnes added to it later.  The home was named El Cerrito because it sat near a high mound (near modern-day El Cerrito Avenue).  It became a primary residence for George and Agnes Howard beginning around 1864—not long after train service began between San Francisco and San Jose, with a stop in San Mateo.

That same year —1864—the newly organized St. Matthew’s Episcopal church began to hold services in a San Mateo schoolhouse.  The first recorded baptism in the newly organized church was that of George and Agnes’s first son George Henry Howard on St. Matthew’s Day, September 21, 1864.  Little George was a late arrival, coming almost six years after his parents’ first child, Julia Poett Howard.  However, he was quickly joined by two more siblings—a sister, Agnes, and a brother, Joseph Henry Poett Howard.  In 1865, George and Agnes donated two acres of their estate as the site for St. Matthew’s sanctuary. 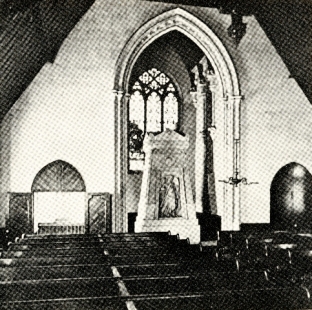 The original placement of the W.D.M. monument was near the front door of St. Matthew’s, making it almost impossible to miss.  Image courtesy:  St. Matthew’s Episcopal Church

The stone for the church, which was completed in May 1866, was quarried on the Howard estate.1 Near the entrance to the church, which then faced north, a massive stone monument was erected in memory of W.D.M. Howard, by his son William and his widow Agnes.  This monument still stands in St. Matthew’s current building, which was constructed after the 1906 earthquake destroyed the original structure.

On another trip to Europe in the early 1870s, the Howards made a decision that would dramatically change the landscape of both San Francisco and the mid-Peninsula:  They hired John McLaren.  McLaren was 26 when he moved to the Howards’ El Cerrito estate in 1873 to begin his career as their chief gardener.  For nearly 15 years, McLaren worked with the Howards to “create a landscape similar to those seen in Europe.”2  He transformed dusty, dry land into cool, shaded lawns.  He built roads and bridges, redirected streams and laid pipeline.  In one year, he lined nine roads with over 25,000 trees, most of them gums.  Enlisting the help of Chinese and Irish work crews, McLaren covered the Howards’ Coyote Point with 70,000 trees (1,000 per acre).  He also lined the County Road (also called El Camino Real) with trees.  The trees continue to this day to provide the mid-Peninsula with a distinctive state highway.  After McLaren, San Francisco’s Peninsula would never be the same. 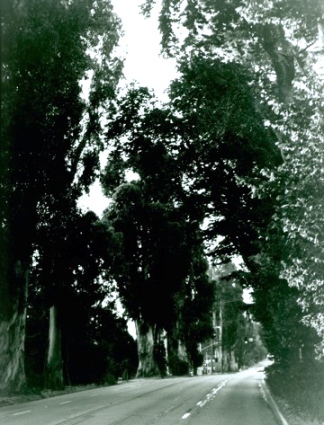 The trees planted by John McLaren still stand as an icon of the Mid-Peninsula.  Image courtesy: Mary Packard

The trees along El Camino Real were planted after one evening, in the 1870s, when George Howard invited other local property owners, including William Ralston and D.O. Mills, to his El Cerrito home to discuss their mutual desire to line the road with shade trees which would also serve as a windbreak.  They reached agreement that McLaren would be retained to plant elms, alternating with eucalyptus, along the side of the road, with each property owner financing his own frontage. Today, these towering El Camino Real trees, as well as thousands of other magnificent mature trees throughout the entire San Mateo Park, Hillsborough and Burlingame area stand as a living tribute to McLaren—and the Howards who had the wisdom and foresight to hire him.

Unfortunately, George was not able to see all the fruits of McLaren’s work.  George died on April 29, 1878.3  Agnes buried him at St. Matthew’s Episcopal, near their El Cerrito home.  He was 51; Agnes was 45.

Once again, she did not remain a widow for long.4

1 The Rt. Rev. William I. Kip, Bishop of California, who was present for St. Matthew’s consecration service, later noted in his journal, “This is the only stone church in the Diocese and has the air of an old English parish church.  For much of the funds necessary for its erection, we are indebted to Mr. George Howard.” Semes, Of These Stones, 2.

3 The Daily Alta reported that Howard had been sick about ten days and his friends “were hopeful of his recovery until about 1 hour before his death.  His illness was the result of an affection of the heart.”

4 More information about Agnes, including her burial site, is contained in the following section, William H. Howard.