Gladys’s twin sister Beatrice married Bernard Forbes, the Eighth Earl of Granard, in 1909.  Thereafter she became known as Lady Granard.  Her husband had overseen the royal stables and stud operations for King George V (British king from 1910 through 1936).

Lady Granard was fond of the trappings of wealth.  She was a frequent client of Cartier and loved large tiaras, ordering three between 1922 and 1937. 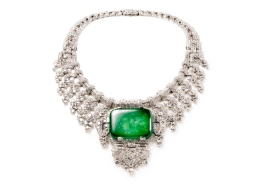 One of her diamond and platinum necklaces featured a 143-carat emerald that sat prominently above her bosom. One diarist wrote in 1937 “she could scarcely walk for jewels.”1  When her father died in 1929, she inherited her parents’ home in Paris as well as his French racing stable.  Lady Granard died in 1972.